The cooling system at Gertrude’s Brown Couch is known for being a bit crap and tonight it certainly lived up to its reputation. Most the diverse crowd were seated on the floor and tried to keep cool by making make-shift fans from showbags and albums from the merch stand. Luckily the live music on offer was well worth venturing into the heat.

Yelka is one of my favourite local singer-songwriters and she certainly didn’t disappoint. Joined on stage by Georgia Fields on ukulele and back-up vocals and Joel Williams on Keyboard she performed a great set. One of the great things about Yelka is that her songs can be both funny and touching at the same time. A large portion of the songs in her set were dedicated to mean boys (let’s face it, we all know a couple) as well as more unexpected subjects such as Joel getting parking fines on Ticket to Park and the old people in who live in the nursing home where her dad works. Her cover of Beyonce’s Crazy In Love was the highlight of the set with Georgia Field’s harmonies working perfectly with her excellent vocals.

As great as Yelka’s set was, tonight was all about Mezz Coleman. Joined on stage by what appeared to be half her family and a bunch of friends to launch her fantastic debut album Parts of You, Parts of Me, it felt like you were witnessing a really awesome family gathering. Bridging the gap between jazz and pop she delivered brilliant set that was entertaining and at times moving.  Beginning with album opener Personal(complete with a string section comprised of co-workers) it instantly becomes clear just how powerful Mezz’s voice really is. The songs on the album really come alive in the live setting, especially the sorrowful Sorry, Sorry and the jazzy Don’t Touch Me. She dedicated the infectious Found in Family to the Footscray crew and it was one of the most upbeat moments of the set. Yelka and Georgia Fields were invited onstage to perform a three-part harmony version of Don’t Leave Nobody But The Baby from the film O Brother Where Art Thou? The singers’ vocals worked wonderfully together and it was one of the set’s highlights. The best track of the night however was the album’s first single and set closer Circus. Inviting everyone who had played on the night back onstage, it really was a grande finale. The combination of horns, strings, backing vocals, the band and Mezz’s powerful voice was amazing and well worth braving the heat to see. As soon as she finished playing, the chants for an encore began and she closed the night with a soulful cover of The Beatles classic Oh Darling, leaving the crowd desperate for more. 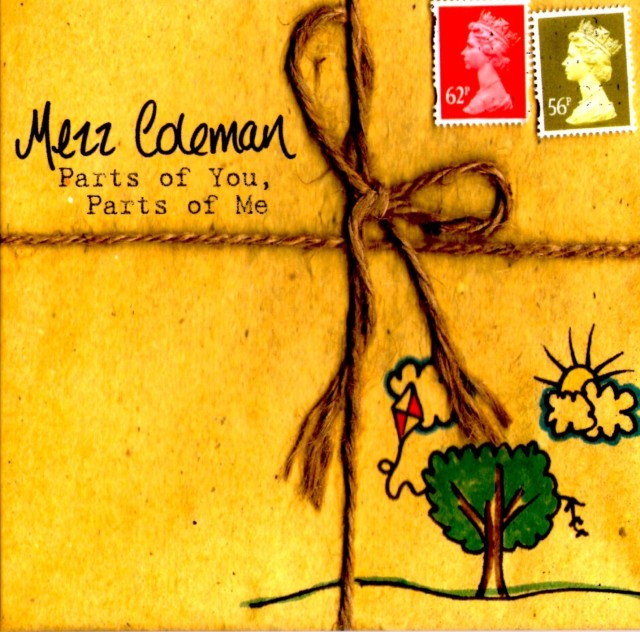 Sarah Blasko, Yelka, Claire Bowditch…It’s hard not  to be amazed at the number of quality female singer-songwriters coming out of Australia. Now we have another name to add to the list: Melbourne singer-songwriter Mezz Coleman. Mezz effortlessly bridges the gap between jazz and pop and creates music that’s catchy enough to sing along to yet sophisticated enough to play at a dinner party.

Her debut album Parts of You, Parts of Me, will be released on the 20th of February and it could easily rival anything created by some of this countries more well-known singer-songwriters.

One of the problems with any kind of acoustic music is that often there is a lack of variety and the songs can blend into each other. This is not a problem with this album. While most of the songs remain at a fairly slow tempo, thy range from cheerful to mournful and Mezz’s voice has a way of drawing you in. Most of her songs are just as catchy as anything that gets played on your local top 40 radio station.

Circus is probably the most upbeat song on the album and the inclusion of horns makes it stand out from the crowd. Sorry, Sorry is both beautiful and depressing and highlights Mezz’s skill as both as a vocalist and a songwriter.Can I Be almost has a touch of Tori Amos about it and showcases her quirky side.

Parts of You, Parts of Me is an outstanding album. If you’re remotely interested in Australian music I strongly suggest you pick up a copy. You won’t regret it.

Mezz Coleman’s album launch is on the 20th of February at Gertrude’s Brown Couch. If you’re in Melbourne and want to see some good live music, you should definitely come along.

I’ve decided to start a new feature on this blog: cover songs on Tuesdays.

Because it is a bit of a nothing day. It isn’t dreaded like Monday, it isn’t in the middle of the week like Wednesday, it isn’t near the weekend like Thursday and Friday and nobody I know gets Tuesdays off. So from now on, it will be covers day. At least on this blog anyway.

The first cover I have for you today is a cover of Animals Collective’s My Girls by :Kinema:. The bio they sent was incredibly short so all I can tell you  is that they met on a European road trip and they make smooth electronic music. I can’t say I am a huge fan of this cover, especially the highly synthesised  vocals but I’m sure they’ll be people out there who think otherwise.

For many people listening to Lady Gaga is like driving past a car crash. You know you’re not supposed to look but…hang on a second…did she just say the words “disco stick?”

Despite the fact that her lyrics really are quite hilarious there really does seem to be a lack of Lady Gaga covers, especially considering male singer-songwriters and punk bands generally seem to love this kind of thing.

Today I have a cover of Poker Face by Yelka, a young singer songwriter from Melbourne. She has a great voice and plays in a style that can easily be compared to the likes of Clare Bowditch,  which is what makes this cover so good.In fact, it almost sounds classy.

You can hear the cover and some of her original songs on her myspace.

There are two types of  live acoustic music: there is the boring, lifeless kind that sound like it has been taken straight from the CD and then there is the entertaining kind that is either emotional or delivered in a way that sucks the audience in. Luckily all of the bands that performed on Saturday night fit into the latter catagory.

This gig was organised to help Yelka raise funds to record her debut album, and if tonight is anything to go by, it will definatly be one worth buying.

I missed out on the first support act but arrived just in time to catch the beginning of Georgia Fields‘ set. This was my first time seeing her live and apperently she usually performs with a band. Her music is a little on the quirky side and her lyrics were often witty. She mixed up her set by switching from guitar to keyboard to ukele. She is definently worth checking out.

It isn’t often that you get to witness someting truley orginal. When Tim McMillian introduced his band as “The Renagades of Goblincore” we knew we were in for a treat.  Joined by a dummer and a bass player he played amazing metal style guitar on an acoustic guitar and would often interrupt instrumentals by shouting in what sounded like German. Occaisonally he would also join the bass player for some mournful sounding singing.  this may sound bizzare on paper, and to an extent it was, his set was one of the most entertaing I’ve seen in quite some time. In between songs she would share hilarious stories (I won’t give anything away) and would often begin songs with instrumental covers of pop songs befor launching into some kind of crazy guitar jam. I highly recommend seeing them live if you can.

The final performer tonight was Yelka and her small band. Despite her young age, Yelka makes music that can be both touching and at times, humorous. She has an amazing voice and I wouldn’t be suprised if she ends of sharing the stage with the likes of Clare Bowditch in the near future. She played a mix of old and new material and even threw in a song about one of her bandmate’s habit of getting parking fines. Her set was cut short because of time restrctions, however it didn’t stop it being a great show.

Also, the people standing outside the door listening should be ashamed of themselves. Would it kill you to support the bands and pay $12?

Tim McMillan and Yelka are playing a show at the Northcote Social Club on the 19th of July, I hightly reccomend going.